Norwegian news site Digi.no reports that Google have opened an office in Oslo, Norway. So far the office only employs one, Mr. Jan Grønbech. Grønbech is the former boss of ad giant DoubleCLick (Adlink). However Google employs another 3 people, who are all in Google European headquaters in Dublin Ireland.

Grønbech’s new title is “Vertical Head” and apparently he will heading up the Norwegian office, but also will play a role in starting up real representation in Denmark. Google is already represented in Sweden and so far 5 people work in their office in Stockholm.

Grønbech explains that he will be busy a man as his primary job will be working with the big clients on Adwords and that the opportunities are wide open as only 6-7% of online advertising are being spend on search in Norway and 9% in Sweden – while it’s a whopping 42% in the UK. Grønbech estimates that it will rise to 30-40% in Norway within a very short time.

Google had a long time dispute over the Google.no domain, which was owned by a Norwegian sunglasses company before Google claimed right on the domain. Google lost the first case, but came out on top eventually and won the right to the domain. On the WayBackMachine you can see the sunglass site as it looked in November 2002. 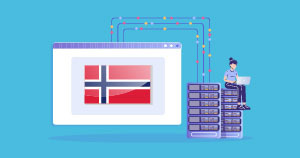