In the unlikely event that you’re targeting the 63-letter German keyword Rindfleischetikettierungsüberwachungs-
aufgabenübertragungsgesetz, keep an eye on its search volume over the coming months. Because what is widely acknowledged by linguists as the longest “authentic” word in the German language has officially ceased to exist following a revocation by a regional parliament.

The word, which refers to the ‘law for the delegation of monitoring beef labelling’, according to the Telegraph, may have been the star of the ‘tongue-twister bingo’ up until today, but it’s in fact only one among many almost infinitely long words formed by compound nouns in the German language.

The Telegraph article provides plenty more examples of German speakers’ fondness of sticking countless nouns together, in effect creating words that seem sheer gobbledygook to non-native speakers. However, perception surely is in the eye of the beholder, as funnily depicted in the tweet below: In theory, the German language allows for a word or concept to be added infinitely to the existing word. And while any word naturally will have to clock in at some point, this linguistic flexibility has resulted in a proliferation of lengthy words.

The impact on search marketing is nothing but profound.

Because of the sheer length of many German words, and the bothersome nature of typing in those words – or even speaking them – abbreviations have gradually permeated the language; abbreviations which often are restrained to “Umgangssprache” – German for colloquial language – meaning that they rarely find their way into any dictionary other than the one actually spoken by natives.

For example, the word “Betäubungsmittelverschreibungsverordnung”, which refers to a regulation that requires a prescription for anaesthetics, is commonly abbreviated “BtMVV” and is now more widely used than the lengthier original word.

What then happens when abbreviations become more commonplace than the actual words from which they derive?

It translates into search volume.

With this is mind, it’s perhaps not all that surprising that BtMVV generates 2.7 times as many local searches as the official term. Moreover, there are no related search terms when entering “Betäubungsmittelverschreibungsverordnung” into Google’s Keyword Tool, nor can the abbreviation be found in the standard German dictionary, Duden. So there you go: yet another example of why you should never translate your keywords.

This is not an isolated case. Far from it! I could go on, but I think I’ll just leave it at this: Have native linguists research your keywords. Because they’ve grown up in the country you’re targeting, they handle the language intuitively and are aware of local phrases and expressions that no automated tool would ever be able to provide you with. The language you find in dictionaries, and the one that’s spoken and used by the native population are always worlds apart. 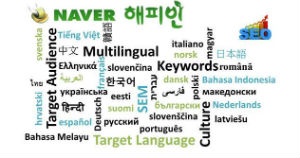