India’s population is exceeding 1 billion out of which Internet Users are nearly 26 million. More than 50% of the users are between age group 20-40.. With the recent reduction in cost and easier availability of Broadband (min 256 kbps) the users are likely to increase to 100 million in next 18 months.
Annual Advertising revenue amounts to about € 2 billion according to Traditional Advertising Industry sources.

The aggregate online ad spending for the financial year April, 2004 to March, 2005 was about 14.70 million Euros. According to an Indian online association this will increase to about 28 million Euros in the current financial year will exceed 46 million Euro in the next financial year.
India’s booming wireless sector, the world’s fastest growing major mobile market, added 2.49 million new users in July, 2005 taking the total number of customers to 60.366 million, as announced by the industry association.

The educated young consumers online are demanding useful, complete product and warranty information and slowly marketers are responding to it. But due to the lack of knowledge about the contribution an optimised site can make through search marketing the growth rate is very poor

However, the need for SEO/SEM is strongly felt by the marketers of financial services, automobiles, consumer electronics, telecommunication and packaged travel and is likely to grow exponent. The future is quite promising. 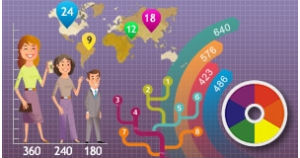