It’s a certain fact that, even after nearly 20 years since inception, all online advertising is growing as an industry and even search volumes are increasing. However, global search volumes are primarily increasing on mobile and these searches are differing in content and intent than desktop PC searches. Because of this, some advertisers are better positioned to take advantage of this trend than others (e.g. if you have no bricks and mortar presence and sell complex, online-only financial products, you’re less likely to get growth rates in Mobile on a par with a restaurant chain).

However, people actually only spend about 5% of their online time searching – even on mobile devices – and display ads are becoming more and more available to deliver on more and more platforms for a greater share of the remaining 95% of online time.

At the moment, UK display ad spend is remarkably low at just 24% of all digital advertising versus Search’s 58% and this is pretty representative of the global share. At some stage, this significant mismatch has to be righted and you should be on the front wave if you’re to benefit most. (via eConsultancy “State of Display”)

Time spent online on mobile devices is rapidly increasing but is nevertheless dominated by Facebook time. It is here that we see the key to getting in front of people for much more time, regardless of device since Facebook launched Facebook Exchange. Facebook alone accounts for about a quarter of all online display inventory so being able to invest in Real Time Bidding (RTB) through Facebook is going to allow for growth that actually is beyond merely branding but has ROI at the end of it.

At eSearchVision, we specialise in performance display, rather than awareness display, so the rise in RTB across the web is of major interest and we believe will be a top source for growth.

Why has it taken so long for Display to get anywhere near the standing that it should logically have, you may ask. It has so far been down to two main issues, accountability and market fragmentation.

Even now, the Display marketplace is colossally complex with multiple players at all points of the chain of networks through which ads are funnelled. This was inevitable because the early web was unregulated (pre-IAB) and so standardisation like file size, dimension, cookie format and so on was just not there. Then, aside from the obvious standalone publishers (i.e. websites) you had several waves of publisher types, from portals to blog hosts, which variously decided to sell space in-house or to join networks or exchanges. Another complicating factor was that a lot of the banner advertising was conceived and managed by the big advertising agencies that dominated offline media and they all went about trying to set up their own solutions in competition with startups (who, in many cases, were subsequently bought, sold or shut down over time).

Unlike in Search, where if Google has a 70% share, that’s what it has, with Display, most networks will have ads that are seen by about the same proportion of the available population but individually may only deliver three or four ads to each person who will see perhaps 300 ads in their browsing day. This meant that you really needed to get plugged in to as many networks as possible through whatever method in order to really get noticed by your audience.

Whereas in Search, the earliest players are effectively dead leaving two main living, breathing platforms (even in markets like Russia and China who have a major local search engine, the pattern is essentially 2 major search players), Display is still swarming with legacy infrastructure and complexity.

When you have such plurality of the inventory (and management) market in a real-time publishing environment, you inevitably have problems with accountability and unifying tracking data. Plus, measuring transactional (sales) impact with very little reliable data and even less control until recently, meant it just couldn’t be a wise place to invest your online budget with the same abandon as the much “simpler” search channel. It resulted in most of the Display spend being purely for branding purposes – glorified roadside billboards.

Search involves a self-selecting audience, intent is relatively obvious (and present) and it boils down to 2 or 3 players with the strategy of providing an answer to a direct question. Display was never that simple and only now is it coming to the point where getting sustainable performance, thanks to an improving toolbox, is a realistic prospect.

Internationally, the shape of Display growth via RTB will differ enormously from almost entirely mobile in Africa to a diverse mix, including in game advertising in the US, UK, Japan etc. As web speed varies, primarily, so will speed of Display inventory growth, since data rate directly affects how many pages you can load in a given time period.

Since we’re nowhere near saturation point globally in terms of adult population and internet-enabled devices, we should not only see more searches but much more inventory and eyeballs for display ads. Remember, it’s not entirely new pages and content that drives inventory but also user growth and increasing online time by users. Still, content growth (more pages) is also a big driver of inventory growth with the advent of IPv6 (although we see a massively varied picture on this issue across the world) and a recent huge expansion in domain suffixes. In turn, this is driven by technologies like HTML5 and augmented reality, which will enable further online functionality and tools we have yet to think of and which will further increase online time along with opportunities for ads to serve.

Internationally, you must always tread carefully since there are a lot of sites you don’t want to be anywhere near. Performance marketing platforms often give you ways to avoid useless impressions but RTB or CPA-based models also help you sidestep the impact of spam sites.

In the mobile space, the foothold Microsoft Windows Phone seems to be getting is providing yet another ecosystem for in-app display ads which is growing by the day. Although targeting through apps is suspect right now, it will only get better at the same time as the potential scale grows.

Another great thing that Display allows is, thanks to the fact that so much online time is spent browsing, leveraging the enormous behavioural data patterns of billions of users to help you target users by behavioural profile. Google’s Ad Manager lets you see the kinds of sites visitors to a given domain are most likely to also visit, for example, and RTB platforms can infer ages and genders by users’ browsing behaviours so you can better subdivide the internet population in a way that maps to your marketing aims.

Only recently have we seen the controls which search marketers were used to start to appear in the Display channel and it is still a little behind but as the levers a marketer can pull increase in number and commonality across networks/platforms, we will be able to hone performance ever more effectively.

So even if you might have all your search keyword bases covered, there will always be room to grow your transactional marketing presence for some time to come.

Senior Creative & Analytics Manager at eSearchVision
Born and based in the UK, Steve is embarking on his 7th year in the PPC industry after starting by working at the embryonic Microsoft adCenter (now Bing Ads) in 2006 helping clients optimise accounts. Steve has been with eSearchVision since early 2011 managing a range of accounts large and small in a host of industry verticals. A number of accounts he has worked on involve multi-lingual and multi-market campaigns. Prior to working in PPC, he has worked for four years in the Academic Information Database sector. His hobbies include photography, music, writing and travel. 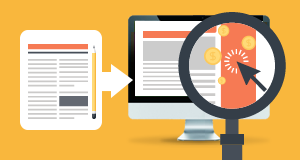