Launching on October 26th to much fanfare, the Windows store has been live for little over a month and initial signs are good, including claims by Microsoft of 40 million upgrades to Windows 8 so far. Will this be good enough to enable the Windows Store to gain ground on the runaway leaders, Google’s Play and Apple App stores, establishing a firm foothold in a rapidly growing market?

Aside from the existing Windows Phone Store, Microsoft has launched app stores in 3 new flavours; x64, x86 and RT – defined by the processors found in different devices. X64 and x86 are aimed at Intel processors found in desktops and laptops and the comparison would be the Apple Mac App Store. Windows RT is designed for ARM processors or Surface platform, so a fair comparison would be other tablets and thus iPad App Store.

According to Distimo, who recently published their initial findings on the Windows Store, the number of apps available has pushed over the 21,000 within a month. Although this seems a pretty small figure compared to the market leaders, Google and Apple who both boast over 600,000 in their stores, the Windows Store has already managed to exceed the total number of apps available in the Mac App Store, which only has 12,998, but has been around for nearly two years. On the face of it, this seems quite respectable, although the majority are likely to be from existing Windows developers, whose software no longer works with Windows 8.

In the build-up to the launch, Windows has also been promoting services to developers, including guides (including iOS developers looking to convert their apps for the Microsoft store), SDKs, testing tools and a multilingual App toolkit to help localise your app among others. Existing developers and students will also receive free Store Developer accounts for one year (Webpronews).

Free and Paid apps in the Windows Store

Even with this significant adoption rate by developers, paid apps only represents 14% of the total number, which is small even compared to Google Play with 35% and well known for having a large proportion of free apps. Given that 84% of Mac Store apps are paid, the Windows Store still has fewer paid apps in total.

About 55% of the paid apps in the Windows Store are priced below $2.00, which is similar to other app stores. This is 60% in the Windows RT (store for Surface), which doesn’t seem too significant; the average prices across the 3 new stores are very different. $4.87 is the average price for all apps in the Windows RT store, whilst Windows desktop is $13.32 (x86) and $14.29 (x64), leading Distimo to postulate that publishers have adopted different pricing strategies for tablets versus desktops. We also see a difference between Apple’s desktop and tablet prices, with Mac Store prices at an average of $12.55 versus $4.44 in the iPad App Store.

However, as the chart above illustrates, the average price of the top 100 applications reveals there is little difference between all Windows stores. In Windows desktop stores the average is $3.67 (x86 and x64), while the RT store is similar at $2.98. Perhaps this signals that publishers of paid apps are struggling to get traction and the clamour for free apps is most important for Windows users right now?

Games are the biggest category in the app store with just over a quarter of all apps, which is typical in other app stores. However, according to Distimo there seems to be a higher proportion of more practical or ‘serious’ apps in the windows store, which is typical of the Mac App Store. The ratio of games among the top overall free apps is around 50% in most app stores but only 25% in the Windows store.

According to Distimo, Windows store has done ‘a very good job’ of promoting local content, or rather, successfully persuading developers to develop local content. Out of 21,183 apps available worldwide, 65% are available in the US, compared to the Mac App Store which has 98% of its app available in the US. The Windows Store is currently available in 80 markets worldwide and given it’s early days there’s no surprise that smaller countries have few or no apps at all. However, in more significant markets such as Japan, 41% of the top 300 apps are only popular in this region. There’s a similar situation in China and South Korea, which are markets that tend to prefer localised content, as Distimo research previously found. On the face of it, should Apple and Google be concerned?  Looking at the US, even though the Mac App Store has 5 times as many PAID downloads, when you factor in FREE downloads it is comprehensively beaten by Microsoft’s 200,000 total daily downloads compared to 80,000 in the Mac App store. Additionally, with a host of developers focusing on gaming and utility categories, including Microsoft’s own software products, it could well be that the Mac app Store is outgunned in both free and paid app downloads in the near future. However, Microsoft has to do more to encourage the growth of paid apps, as data from Distimo analytics users show that downloads of the top 300 apps are down by 28% over the past month, as shown below. Clearly Microsoft is in a good position to capitalise with their desktop software users as leverage into the app market for desktop devices. Going forward this could make what was designed specifically for the mobile, a desktop commodity. Not only that, perhaps this encourages developers to cross over onto other Microsoft devices and to put the Store it in good shape for the tablet and phone markets as well – perhaps even looking at Android users as fair game? It seems strange, but now Microsoft are the new kids on the block and no doubt that the ecosystem has just had a significant and much needed shake-up. Watch this space.

If you need to develop and market an app in any language, a full list of services can be found via www.globalcentral.net, sign up for more information.

Obviously, The French Only Go To French Websites 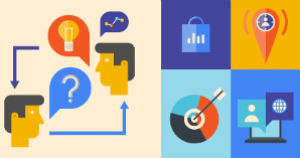 The Forecast For Search In Australia For 2013
Facebook Advertising And Global Impressions: Adidas Vs. Nike