Back in March, Webcertain published a post looking at the importance of mobile applications in Global Mobile Strategies, so I thought I would build on this and introduce to you five easy tips to help you localise your app in order to appeal to your wider market overseas, but first let’s look at some figures…

According to a study by Flurry Analytics, of the top ten largest international smartphone markets, eight of these are non-English speaking regions, and the number of global mobile users without smartphones (but who could afford to use one) means that there is also a huge potential market out there. Leading this category are China, India and Japan with 112 million, 75 million and 61 million potential smartphone users respectively. That’s a whopping 248 million potential users of your mobile app! Impressive, right?!

In the long run it might be worth considering localising your app by creating multilingual versions in Chinese, Hindi, Japanese, Russian, Brazilian Portuguese as well as the main European languages, but let’s not get carried away. It’s not all about translation, there are several other elements which you should consider when moving forward with your mobile strategy on an international scale, so here are our tips to help you on your way.

Speaking your customers' language is essential if you want to succeed in international markets. By having an app in the target language, you can improve communication and also connect with your target audience on a deeper level that is more likely to result in engagement and conversions. Our app translation service enables you to get the most out of your app, whether you want to launch a new app in a new country, or update your current version for re-launch. Our adaptable workflow can be tailored to your needs and the needs of your app, providing you with fully translated content in your target language.

1. A Natural Look and Feel:

When a smartphone user decides to download your app their expectations are usually quite high. They expect an app that is easy to use and navigate, that’s engaging and fulfils a purpose, and that is perfectly targeted at them as the intended end user. App users today are pretty demanding and if you want to make sure you get those five-star reviews then it’s important that you app looks and feels like it was built for their market. Although it can be difficult for companies to know whether they will eventually launch their app on an international scale it’s still worth keeping internationalisation in mind during the developmental stage, but I’ll cover that in the next section.

Let’s look at the following example which is a travel and tourism app aimed at Chinese users, it’s a bit like “TripAdvisor”.

This app has been well developed for the Chinese market, but what if they wanted to localise this to be suitable for international users? There are a lot of factors which play a part here, not just linguistically but also technically from an engineering perspective. Your overall aim should be to create a replica of your existing app which takes into consideration local currency, time and date, images, icons, symbols and colours, after all different cultures, religions and communities perceive things differently and this should definitely be considered prior to the development stage.

As I’ve briefly mentioned, there are certain things which should be taken into consideration during the development of a mobile application. Below are just a few of the things your engineers should incorporate into your project brief:

For further information on the technical aspects of software localisation projects please refer to my past post.

Conducting a pseudo-translation on the content of your existing app will identify where potential issues may arise during the localisation of your application which may not have been identified until later down the line, potentially costing you more time and money in the long run. This sort of a dry-run is definitely a good investment during the initial testing stage.

Since its launch in 2008, the Apple App Store has amassed a staggering number of installs globally. Since the vast majority of apps are downloaded as a result of keyword searches, it is essential that your app is keyword optimised as this will improve your visibility and return on investment. We will conduct keyword research for your app, using specialist tools to expand your existing keyword list. We will then gather ranking and competition data for each keyword, and will also research the keywords being targeted by your top three competitors. Finally, we will write meta content for your app that targets the most appropriate and popular of your target keywords and stays in keeping with your brand. The keyword research, rankings and meta content recommendations will all be provided in an Excel format.

3. Take your App for a Test Drive

It’s essential that your app undergoes rigorous testing before being made available to the masses. Like any other translation project which has heavy involvement on an engineering side there are several testing stages which a mobile application should go through, such as:

It would be advisable that time is also taken to either develop a testing platform or select an appropriate simulator, as well as using physical handsets from each of your target country’s network operators during the testing stage. Ironing out the creases at this stage will result in less updates once your app has been launched in your new territory, which is good news for both your developers and your end user.

“Customers are more likely to read about your app if it’s in their native language. It just makes it easier for more people to learn about your app.” – Apple In the words of Apple, it’s important that you market your app in the language of your target audience in order to maximise your brand awareness, visibility and number of downloads. Localising your content for the app store is just as important as localising the app itself. Local versions of the Apple and Google Play Stores are going to be the go to places for international users to search and download their apps of choice (Unless you’re in China!).

Localised app name, description, keywords and screenshots from your newly localised application will do wonders for your Global Mobile Strategy, and takes us back to our first point about making your app appear like it was originally intended for use by your international users.

Take the example below which is a screenshot of Amazon’s “BuyVIP” application as found in the Spanish version of the Apple App Store, which is a great illustration of the way you can maximise your potential overseas.

You can also optimise the content you have in the app store meaning that selecting the right keywords and incorporating them into your app descriptions will help to bump up your app in relevant search results.

So let’s check…you’ve thoroughly researched, localised and tested your mobile application, as well as adapting your app store descriptions for your target market, but what else can you do as part of your international strategy?

Well, further actions you could consider include localising your company’s website or blog site, as well as any social media activities you might conduct in your home market. Increasing your brand awareness is key and will certainly support your efforts moving forward.

As a last note, in an article on launching apps in international markets, Mashable provide the following to-do lists which you might find useful for future reference. Here’s to your global mobile invasion!

One Response to 5 Tips for Marvellous Mobile App Localisation 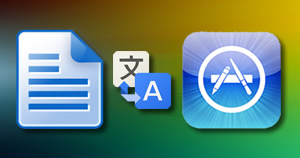 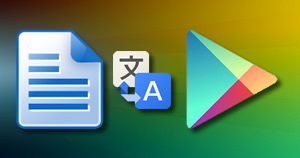